A central theme of Matthew Pillsbury’s photography is investigating the myriad ways we fill both space and time. Using long exposures to create visual narratives of an indeterminate period, Pillsbury offers a way of representing the world that is wholly unique to photography. Concentrating on the relationship between space, time and technology, his work depicts the physical spaces we occupy and pass through, without committing to a single traditional photographic moment.

Often using exposures exceeding one hour, Pillsbury’s photographs render buildings and other stationary objects as solid, enduring entities, fixed and stable, whereas objects in motion, including pedestrians and traffic, appear as transparent incorporeal apparitions, in flux and impermanent. Each image thus captures the movement of a sequence of moments, stretched across a singular spatial canvas.

In the Screen Lives (2005) series, subjects are shown in the privacy of their homes watching TV, working on their computers, or using other screens. Individuals are depicted as physically present yet mentally absent from their surroundings; they remain spatially isolated while digitally tethered to others. In City Stages (2012), Pillsbury’s subjects are removed from the setting of their homes and placed within public spaces around New York that become the stages on which the dramas of individual lives unfold. In 2014, Pillsbury photographed his first body of work in color, Tokyo (2014). The series takes us to the most populous city in the world, where tradition and technology have merged to create a landscape in which robots and LEDs give the city a luminous pulse.

Drawing on inspiration from Hiroshi Sugimoto and Abelardo Morell, Pillsbury’s photographs invite viewers to reflect upon how they choose to fill their spaces and time. Demonstrating a talent for making the familiar seem strange, Pillsbury draws attention to the fundamental ingredients of existence, transforming overlooked aspects of reality into both subject and object. 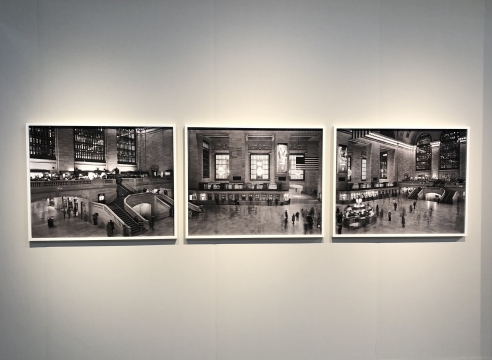 This year marks 25 years of the Armory Show—New York's preeminent art fair that brings together 198 galleries from 33 countries around the globe. The show serves as an unofficial kickoff of New York's art calendar, with an exciting survey of the modern and contemporary art world for both collectors and visitors alike. Led by executive director Nicole Berry, this year's show spreads over the west side's Piers 90, 92, and 94 with an exciting array of both blue-chip and emerging artists—though if three piers worth of art aren't enough to satisfy you, be sure to add the Armory Week's satellite fairs including Independent, NADA Gallery Open, Spring/Break Art Show, Scope, and Plan B to your calendar. The main event itself can be a behemoth of a fair to get through, so here we highlight booths and pieces one should be sure to check out.